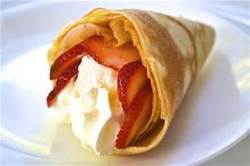 If you've always wanted to make French crêpes but were intimidated by the prospect, you will think differently after making this recipe!  All you need to do is gather your ingredients, turn on your blender, and voilà! You'll have the best crêpes you've ever tasted!
Ingredients: 1 cup buttermilk, 2 tbsp. butter (melted and cooled), 1 tsp. sugar, 1 tsp. vanilla (or Kirsch liquor), 3 eggs, 1 tsp. water,        1 cup flour.

Preparation: Place the flour and salt on a piece of wax paper and set aside.  Place the first 6 ingredients into a blender and blend on low speed.  After 15 seconds, make a funnel with the wax paper and pour the flour mixture through the hole in the top of the blender lid while the blender is running and blend another 15 seconds or until ingredients are well blended.  Chill mixture in the refrigerator 15 minutes, while heating up a non-stick skillet. to medium-high heat.  Once hot, take a cut stick of butter and wipe it on the pan to lightly coat the bottom  Next, pour enough batter into the hot pan to cover 3/4 of the surface.  Working quickly, swirl the batter around the pan with a turn of the wrist so it forms a thin layer and cook approximately 1 minute 30 seconds each side, or until golden brown, flipping over carefully with a rubber spatula.  Store crêpes on plate as you make them.  When you're done, spread a thin layer of Nutella on crêpes and sliced bananas, or fill with sliced strawberries and whipped cream, topping them with chocolate sauce and whipped cream or fresh berries or bananas and whipped cream...the sky's the limit!.  Crêpes freeze well--for up to 3 months--if you place parchment paper or wax paper between each crêpe and store them in a freezer bag, on their side.

Chef's note: To make savory crêpes using this recipe, simply omit the flavoring (vanilla or Kirsch) and leave out the sugar.